Future Workforce Predictions: What Can HR Do Today to Prepare for Tomorrow?

Although it’s tempting – and exciting – to dig into predictions for the global workforce of 2030, it often isn’t practical to look that far into the future to determine our actions today. For example, a recent publication from PwC reports five “megatrends” they believe will shape this future: technological breakthroughs, demographic shifts, rapid […]

Once upon a time, a phone was once simply a phone and nothing more – and group insurance was also just that. But today’s phones are pocket-sized computers that do more than we could have ever imagined. Likewise, today’s group insurance offerings are increasingly complex and multi-faceted.   A significant driver of this change is […]

How Will Non-Traditional Farming Disrupt the Agriculture Industry?

2017’s Hurricane Irma was one of the most powerful – and costliest – storms the Atlantic region has ever seen. And with an estimated $2.6 billion in crop loss, farmers were some of the hardest-hit victims.   But it doesn’t have to be a record-breaking cyclone for the weather to impact the agriculture industry. When […] 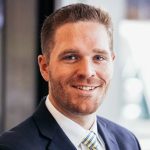 Slayton Search Partners, a globally respected leader in retained executive search, is delighted to announce that John Ratliff has joined the company as Vice President and Principal.   John will be focused on supporting Slayton partners with engagements in the industrial and consumer sectors, while also developing and expanding his own client relationships.   John […]

You need key players at the helm of your company. We have the experience and approach to find them.

Our recent executive placements are great examples of the work we do with industry leaders and distinguished clients.

Our team of search leaders has deep access to a network of outstanding executives and knows what it takes to recruit the best.